Greetings and Blessings
I got to know Charlie Hyatt in my teenage year when I participated in the annual Pantomimes in which he always starred. A comedian on and off stage, we young girls could always expect a joke or a tickle from Charlie as we rushed around backstage taking part in the fun of the show.
Then I grew up and had a son, Makonnen, who learned to read before he was 3 years old by reading and having read to him books with stories  from all over the world. I was very proud of his accomplishment, but there was one problem. He had learned spoken and written English perfectly, but did not yet speak or understand Jamaican Patois. I could not find any books in Patois but to the rescue came the launch of Charlie’s book ‘WHEN ME WAS A BWOY’ and I bought a copy.
What a joy it was to read it to him, Chapter by Chapter, as he listened, giggled, and laughed out loud at Charlie’s storytelling about life as a young Jamaican in days gone by. I would have to explain the meaning of words and activities Charlie wrote about, like going to mango bush, playing marbles, hunting lizards and all the many adventures Charlie illustrated so vividly and with so much humour in his stories.  It became his favourite book and I was always being asked to “Read me another Charlie story, please Mummy’. 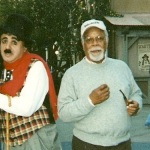 One day when he was 4 years old, I got a job to promote a Book Fair at the National Arena. My son was with me when I came across Charlie waiting inside a booth promoting his book.  After sharing a big Hello hug, I introduced my son to Charlie.  He took one awe-inspiring look at the man and announced to him “You’re funnier than Charlie Chaplin!!!”

Charlie gave him a look of shocked amazement, then burst into a huge laugh. “You know Charlie Chaplin!!!”  He reached down, stretched out his hand and shook hands with Makonnen. “That’s the BEST compliment I’ve ever had!!!” he said, and the two of them held hands for a long moment.

I wish there had been a camera to record the sight of one small, serious-faced dreadlocksed boy shaking hands with someone he considered a Living Legend he never dreamed he would ever meet, and the Living Legend amazed and proud that someone so young not only knew who Charlie Chaplin was, but rated him higher.

I have stored the moment among the many memories of my friend Charlie Hyatt.

You, Charles Jr., have inherited a great legacy. So glad you are preserving it.