To Be A Real Baller 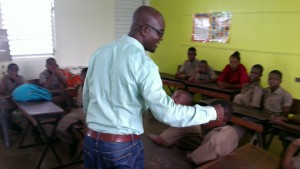 At the request of the young men at Boys Town Infant and Primary, we approached the Jamaica Football Federation (JFF)  to request the indulgence of a representative the organization at one of our “Straight Talk” sessions.  The staff at the Federation were open, eager and willing to participate, upon learning that “Straight Talk” is geared towards helping students develop a mind of professional preparation. Our approach was to ask for a Reggae Boyz player to be the representative at our October session.  However, we were informed that Mr. Roy Simpson, the manager of the Reggae Boyz would lead the session. Little did we know that Mr. Simpson was the perfect representative of the JFF.

As soon as the students saw Mr. Simpson walk through the classroom door, the boys began to murmur, point and say out loud “Is a football man dat!”.  There was hardly a need for me to say anything further and so I handed over the presentation to Mr. Simpson.  Mr. Simpson had the students sitting on the edge of their seat with his anecdotes, directions, advice, warnings and encouragement that covered the topic of life as a student to life as a professional in a football career.  Whereas one might think that Mr. Simpson would talk about how to become a football player, the interactive and engaging session covered much more than that.  A plethora of professions were covered during the talk, such as, Press Officers, Videos Admins, Chefs, Physiotherapists, Team Doctors, Trainers, Head Coach and the many others that comprises a football team.

The session was so powerful that the students, without prompting, burst out into song about words such as, empowerment, hard work, integrity, respect and love, (words prominently displayed above the white board in the classroom).  It was a euphoric moment to witness the joy on the students faces, as they rang out the tune which highlighted each word and paralleled each word with the responsibilities of being a ‘team player’. 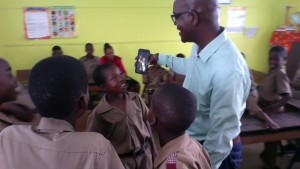 Roy Simpson showing the students a photo of himself and Lionel Messi.

Mr. Simpson took immediate advantage of the moment to emphasize the importance of recognizing and  respecting the level of responsibility that is coupled with being a club football player, from under 12 to national representation. One such responsibility is to always remember to protect their teacher and guardian by doing what is supposed to be done, when it is supposed to be done.  The students learned that this simple act will allow teachers to concentrate on providing each student with more knowledge, rather than focusing on maintaining order and resolving disciplinary issues. It was further explained that this is the same manner that the players on a football team protect the goal keeper.

Mr. Simpson also spoke about how important it is to always remember where you are from and the importance of returning to that place to give back, whether it be to a school, a community, a parish, or a country.  He stressed how important it is for each student to return to where they began their journey and help at least one  person to attain their professional goals.

The value of math, science and English was emphasized to the students as the mastery of these subjects will serve to enhance their football profession, as football is more than kicking a ball, but it is built on meticulous strategy.

Professionalism starts long before the player gets on the field was another take away of the session.  Mr. Simpson used Lionel Messi as an example, as he showed a photograph of himself and Messi.  This great football player, in accepting the responsibility of being the ‘poster child’ of football, ensures that his deportment remains at an honorable standard. 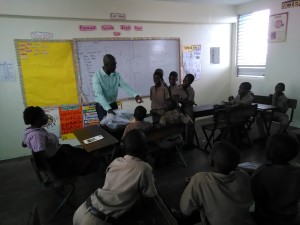 Even though Mr. Simpson and the students wanted to continue with the session for the entire day, the session had to be brought to a close, but not before Mr. Simpson singled out students and rewarded them for their enthusiastic participation. Each student was rewarded with Reggae Boyz paraphernalia.   He also made a promise that the next time he came to Boys Town Infant & Primary School, he would be bearing tickets to an upcoming Reggae Boyz match at the National Stadium.  His final challenge was for the teachers, to select exemplary students that are deserving of the tickets.

It was a pleasure experiencing the expertise of one of Jamaica’s top managers and how he worked effortlessly to rally the students to increase their performance levels. We look forward to continuous collaboration with Mr.Roy Simpson and the Jamaica Football Federation.